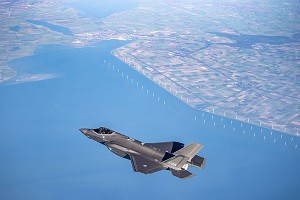 The Dutch F-35A aircraft known as AN-9 departed from the F-35 Final Assembly and Checkout facility at Cameri Air Base, Italy, on Oct. 31 and landed on Dutch soil that same day at Leeuwarden Air Base. The Netherlands has taken delivery of nine F-35s to date: one now at Leeuwarden; six stationed at Luke Air Force Base, Arizona, where Dutch pilots are participating in training; and two stationed at Edwards Air Force Base, California, where Dutch pilots and maintainers participate in operational testing. The Netherlands currently has plans to purchase 37 F-35 aircraft, and recently announced its intent to procure nine more.

“From the very beginning of the F-35 program, the Netherlands has been a key partner in developing, testing, improving, and maintaining this remarkable aircraft,” said Ulmer. “Dutch suppliers have provided high-volume production, structural-design support, and advanced technologies, and Dutch aircraft and personnel continue to support ongoing testing and operations for the worldwide F-35 fleet. As we look to the future, the Netherlands will serve as a sustainment hub in the European region for maintenance, repair, overhaul, and upgrade projects.”

With the addition of Leeuwarden Air Base, F-35s are now operating from 20 bases worldwide. More than 450 F-35s have been delivered and more than 910 pilots and 8,350 maintainers have been trained. Nine countries now have F-35s operating from a base on their home soil and seven services have declared Initial Operating Capability.