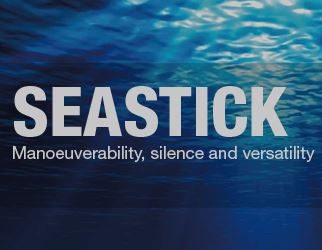 The new Seastick is a breakthrough in AUV design, a truly autonomous machine that can carry out a range of defence and reconnaissance tasks in the sea and along the coast, from mine hunting to searching for strategic objects. With its small size, high-power, excellent temperature control and manoeuvrability, it is a unique product, which can supply data such as photographs and sonar in real time, as Zenatek explains.

The Seastick is the latest result of Italian innovation in deep-water technology, stemming from an ambitious project to create a fully autonomous machine that functions by means of various sensors.

Constructed entirely in Italy, using highly resistant nonmagnetic plastic materials (polypropylene homopolymer), it meets all operational requirements due to its unique features as an AUV.

There are two laterally placed magnetic induction motors, which represent a leap forward in the Seastick’s manoeuvrability. Having two external motors gives it the advantage of freeing space inside the machine, which can be used for installing other surveying sensors and removing any possibility of overheating from the motors.

With the motors completely submerged, minimum heat is conducted, and will never exceed a temperature of more than delta T of 6°C in relation to the water temperature.

Small in stature, high in power
Projected and built through the joint venture formed by Gabri SRL and Zenatek, the brushless motor has been greatly reduced in size, yet it has a higher power potential.

The projected propelled motor is based on a rotating magnetic flux transmission that drives the rotor, and has been designed with a three-blade propeller, which, once in the water, transfers the electromagnetic power to a mechanical drive throughout the stator/rotor body. The power distributed from the motor is limited by software in times of normal navigation, but, in the event of needing a boost in order to overcome obstacles or drag, the firmware will automatically recognise this and increase the torque of the motor. As there is no mechanical motion, the Seastick has a variety of advantages. For example: a silent propulsion compared with traditional motors, and there is no attrition, so consumption is reduced dramatically.

As the motors – which are usually positioned vertically in relation to the vehicle – can be rotated, this will allow for a propelled push towards the prow, representing one of the greatest innovations for changing direction and deepwater manoeuvring.

The motors can be rotated to a horizontal position in line with the body of the vehicle, thus permitting it to complete immersion and fast emersion along the column of water. When necessary, it can also balance the upwards push caused by its positive structure, maintaining zero speed at a constant rate (hovering). The software also independently manages the motor’s speed and the rotation of the propellers, for example, allowing them to turn alone on the central axle of the vehicle and to complete a full 360° with drift of zero, by inverting the direction of one of the propellers in contrast to one of the others.

The manoeuvrability, silence and versatility of Seastick (which have always been the fundamental features in its effective use in military operations), make it perfect for activities like patrolling waters, searching and finding strategic objects (in the sea and along the coast), transporting devices to set destinations, and mine hunting (the use of non-magnetic materials allows it to operate in parts of the sea where there are unexploded bombs).

In semi-emersion, using a camera complete with periscope, it can take high-resolution pictures and stream them to a central operating unit; it can also make recordings that can then be downloaded via Wi-Fi.

Intelligent design
The Seastick was devised to be useful in any kind of operation, with a view to easing the workload of the operator and technician. The Seastick can be dismantled into three pieces, each independent from the other: the prow, the central body and the stern. This is a huge advantage, as each part is individual and can be interchanged with different kinds of sensors (those most suited to operational requirements), and damaged parts or batteries can be replaced easily, without having to transport the whole vehicle to a centre of assistance.

Until now, there have been two different models of the AUV: the classic Seastick, with its reduced size and ability to go down to 300m depth, and the Seastick 1000 XWB, a larger version that can hold a higher number of sensors and reach a depth of 1,000m.

The vehicles are constructed according to a set scheme for both models; the difference between the two is the thickness of the hull and the dimensions, which are suited to reaching greater depths and for holding a higher number of sensors. The structure, internal workings and electrical components are the same. Sensors are added in accordance with the wishes of clients and their operational requirements.

Not only is the Seastick at the forefront of deep-water innovation of AUVs, but it is also based on a series of complex software algorithms, specially programmed by Zenatek to the needs of each client. As a matter of fact, the vehicle can be controlled automatically by means of specific software, carrying all the data and mission parameters inside the vehicle (route to be taken, speed, use of sensors and instruments), hence allowing it to fulfil the mission completely on its own, and to return to the designated pick-up point. As and when necessary, the Seastick can be piloted manually through a PC, joystick or tablet. Furthermore, if the vehicle is travelling on the surface or is connected to an umbilical cable, the client can view in real time all the data being gathered on board (by means of the ROV style, non-working class), such as camera images and sonar signals.

Unique features
To this day, Seastick is the only actual AUV possessing all of the features mentioned above. It is the first step towards a new kind of vehicle and points to the future of underwater robotics. Within a few years, it will be the top leader of reference as a dual-use vehicle: civilian and military. As further evidence of its high-level of technology and dynamic quality, Seastick won first prize for technological innovation (Embedded Design Challenge) at Embedded World 2014 in Nurnberg, a worldwide competition run by the Swiss company Toradex, where it received substantial international recognition.