Mitsubishi Electric Corporation has announced it has developed a teaching-less robot system technology to enable robots to perform tasks, such as sorting and arrangement as fast as humans without having to be taught by specialists. The system incorporates Mitsubishi Electric’s Maisart®1 AI technologies including high-precision speech recognition, which allows operators to issue voice instructions to initiate work tasks and then fine-tune robot movements as required. The technology is expected to be applied in facilities such as food-processing factories where items change frequently, which has made it difficult until now to introduce robots. Mitsubishi Electric aims to commercialize the technology in or after 2023 following further performance enhancements and extensive verifications. The system, responding to voice or menu instructions, scans the work surroundings with a three-dimensional sensor and then automatically programs the robot’s movements. Movements can be easily fine-tuned via further commands from the operator. Mitsubishi Electric’s unique voice-recognition AI, highly accurate even in noisy factories, offers the first voice-instruction user interface deployed by industrial robot manufacturers. For example, in a food-processing factory, a nonspecialist could instruct a robot simply by saying something like “Pack three pieces of chicken in the first section of the lunch box.” The AI can infer implied meanings if a voice instruction is ambiguous, such as determining how much motion compensation is required if instructed “A little more to the right.” Alternatively, a tablet equipped with menus can be used to issue instructions or to select categories such as “where,” “what” and “how many” to generate simple programs.

The tablet also can be used to view stereographic AR simulations that allow the operator to confirm that instructions will have the intended results. For added convenience, the system also can recommend the ideal positioning of a robot in an AR virtual space without requiring a dedicated marker, another industry first.

By enabling the self-programming of robot movements, including obstacle avoidance, and the system reduces the workload associated with gathering environmental information, inputting data and confirming operations using simulators and/or actual equipment. As a result, the system can complete these cumulative processes in just one-tenth or less time compared to conventional methods. In view of such advantages, the system is expected to support the automation of work sites that are not readily suited to robots, such as food-processing factories where items change frequently, requiring robot programs to be updated for each change. 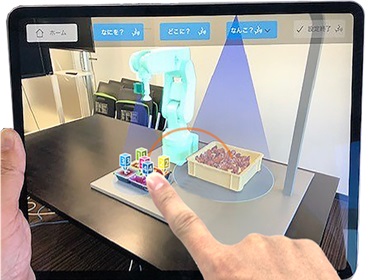 Conventionally, increasing a robot’s operational speed requires time to realize the desired trajectories because the operator must use a simulator and/or the actual robot to determine the best conditions. In response, Mitsubishi Electric has developed a trajectory-generation technology to optimize robot movements using information about surrounding obstacles and robot performance. The company has also developed an acceleration/deceleration-optimization technology that automatically generates a velocity pattern to achieve the shortest possible arm-travel time within the permissible range of force that can be exerted by the robot. Both technologies help to shorten the time required to adjust the robot’s movements.

Optimizing the timing of hand opening/closing also helps to reduce work time. Conventionally, such adjustments are performed manually using simulations and operating the robot. The new technology. however, automatically adjusts and optimizes this timing according to the characteristics of the hand and the object to be grasped, thereby eliminating lengthy manual adjustments while also improving work efficiency.

In addition, the grasping-recognition AI and a three-dimensional sensor fixed above the system quickly determine the best position for grasping, thereby reducing wasted time. Furthermore, visual information from a camera attached to the robot hand allows the robot to self-correct its movement if the position of the robot or the target object shifts.

By optimizing robotic arm and hand movements, Mitsubishi Electric’s new technology enables robots to work as fast as humans, i.e., a minimum 2 seconds to grasp an item and place it in a designated place. Image 3: Robot work time equivalent to that of manual labor.