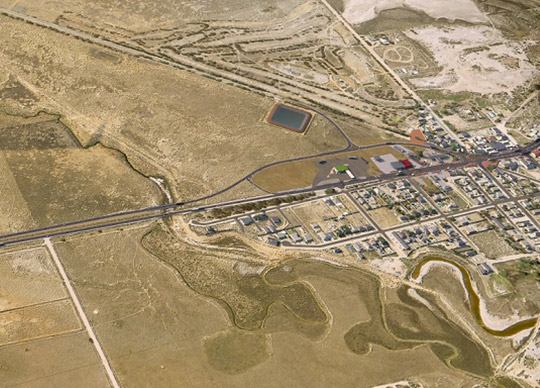 The time it takes to complete major road infrastructure projects will be considerably reduced as a result of significant satellite GPS upgrades under a joint Commonwealth Government, South Australian Government and private sector partnership.

Federal Minister for Resources and Water, Keith Pitt, said the Commonwealth is making a $64 million national investment in upgrading GPS positioning capability in the state, improving accuracy from metres to centimetres.

In South Australia, this will significantly fast track certain works on the Port Wakefield Overpass and Highway Duplication process, with a robot called the ‘Tiny Surveyor’ able to complete line-marking work in days, instead of weeks.

“It has real world benefits for major infrastructure upgrades, such as roads, sporting fields, airport runways and car parks, while also boosting productivity across industries such as agriculture and logistics. This technology will improve positioning accuracy from 5 to 10 metres, right down to 3 to 5 centimetres in areas with mobile phone and internet coverage. It will enable government and industry alike to easily connect and access positioning data and pave the way for innovation and new positioning-based products, services and technologies for the benefit of industry and community,” he said.

The South Australian Minister for Infrastructure Corey Wingard said the tiny robots are already being put to work at Port Wakefield.

“Gruelling and tedious tasks that would take survey crews weeks to complete manually can be done with this little robot in a matter of days thanks to this ground-breaking technology,” Minister Wingard said.

“It enables survey teams to supervise the robot’s movements in safe location away from heavy machinery and live traffic.”

In South Australia 68 reference stations are involved, including 12 new additions.

“South Australia is a good example of the collaborative approach being taken, with over 40 existing South Australian reference stations operated by industry, including Position Partners and UPG (Ultimate Positioning Group) part of the project. This public-private approach to establishing high-quality satellite positioning infrastructure through partnerships with the South Australian Government and industry builds on our nation’s potential,” Minister Pitt said.

“Led by Geoscience Australia, the Commonwealth Government will deliver an extra 57 reference stations nationally as part of our 700-plus strong reference station network, partnering with industry and state governments,” he said.

Position Partners, which supports construction and geospatial businesses throughout South Australia, has provided the ‘Tiny Surveyor’ on the Port Wakefield project.

“Connected to the reference station network and utilising precise positioning technology, the robot automatically completes even the most complex line-marking projects in a fraction of the time it would take using traditional, manual methods,” Martin Nix, CEO of Position Partners, the Australian distributor of Tiny Surveyor, said.

Federal Member for Grey, Rowan Ramsey, said the Port Wakefield Overpass is a significant infrastructure project for the region.

“The Coalition Government contributed close to $100 million towards the $124.5 million project and it’s great to see this investment in GPS technology helping to deliver the project even sooner,” Mr Ramsey said.

“The upgrade will be getting people home sooner and safer and it’s good to see the progress being made on this important project.”

“What the future holds is very exciting in the hands of Australian innovators.”