Trending
You are at:Home»Aeronautics»Life Saving Anti-Collision Software Integrated into First F-35s Seven Years Ahead of Schedule 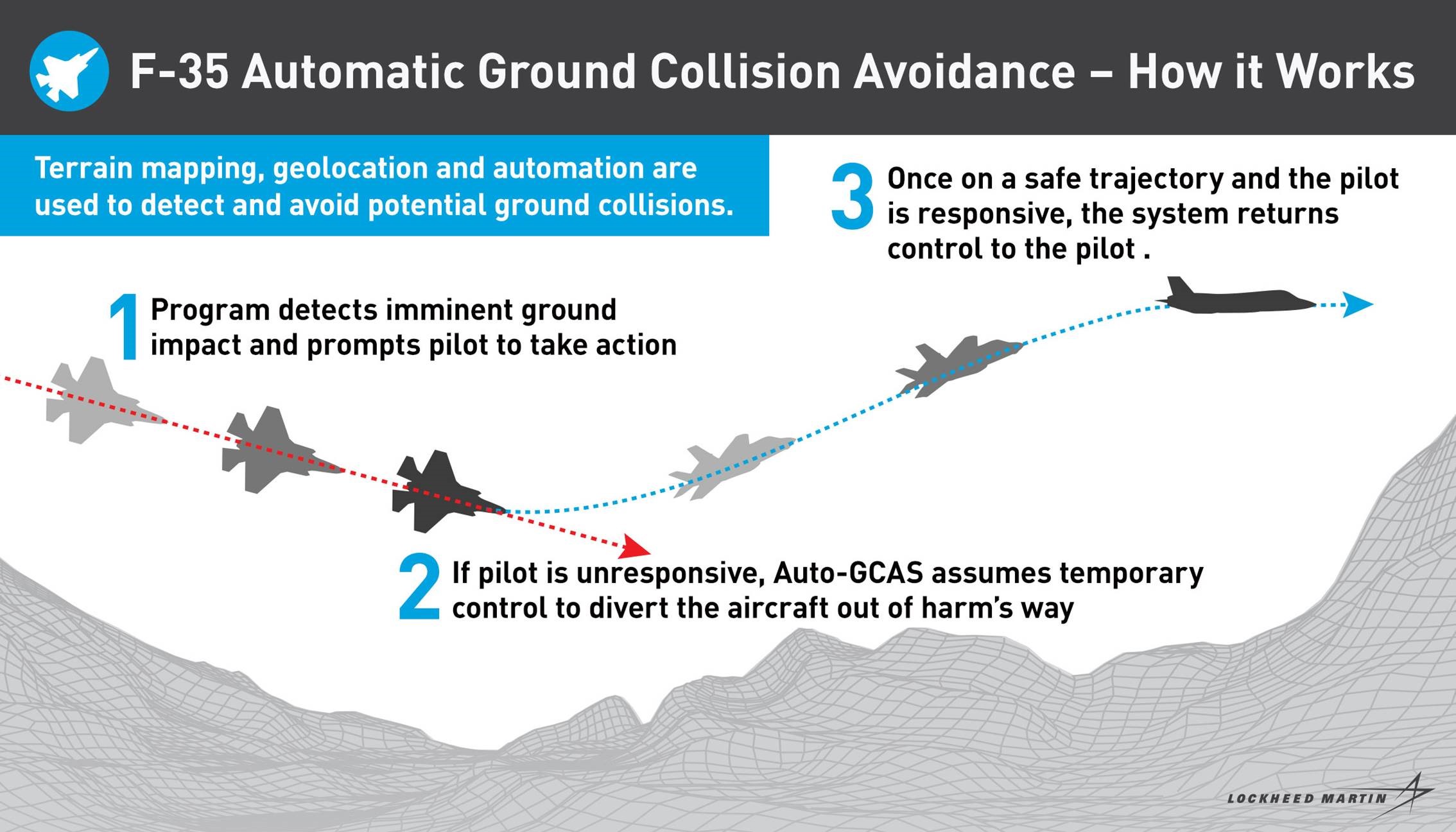 “This is a great day for the warfighter as the Auto-GCAS is a proven system that is long over-due,” said Lt. Gen. Eric Fick, F-35 Program Executive Officer. “Expediting this life-saving technology into the F-35 across the global fleet will bring more warfighters home. Over the service life of the F-35 fleet, having Auto-GCAS is estimated to prevent more than 26 ground collisions from happening. It is indeed a remarkable achievement in aeronautics which will improve the performance, efficiency, and safety of the F-35. The time and effort expended to deliver this critical warfighting capability is worth it – it will save lives.”

Originally developed for the F-16 in partnership with NASA and the Air Force Research Laboratory, Auto-GCAS uses terrain mapping, geolocation and automation to detect and avoid potential ground collisions. When the program recognizes imminent impact, it will prompt the pilot to take action. If the pilot is unresponsive, Auto-GCAS assumes temporary control to divert the aircraft out of harm’s way, and then returns control of the aircraft to the pilot once on a safe trajectory.

The system has been operating successfully aboard the F-16 for more than five years and has already been credited with saving eight F-16 pilots’ lives since 2014.

“Early integration of Auto GCAS in the F-35 is bringing game changing safety capability to a rapidly growing fleet.  It couldn’t have come at a better time as we near full rate production resulting in more aircraft and pilots exposed to rigorous missions”, said Lt. Col. Darren Wees of the Air Force’s F-35 Integration Office, “Many thanks to the tenacious efforts of many organizations primarily the Air Force Research Lab, Air Force Test Center, Lockheed Martin and the F-35 Joint Program Office who made this a technical reality as well as the U.S. Services and F-35 Partner Nations that ensured its inclusion in the program.  These efforts have already saved lives and aircraft in the F-16, and will save lives in the F-35”.

Auto-GCAS was originally slated for delivery in the 2026 timeframe. To accelerate the technology, AFRL and Lockheed Martin conducted positive feasibility studies and the F-35 Joint Program Office and Lockheed Martin then implemented an agile approach to develop the technology for integration on the F-35. The 412th Test Wing at Edwards Air Force Base then completed a rigorous flight testing program to validate its performance and safety, which led to the wing’s formal recommendation to field AutoGCAS aboard the F-35. 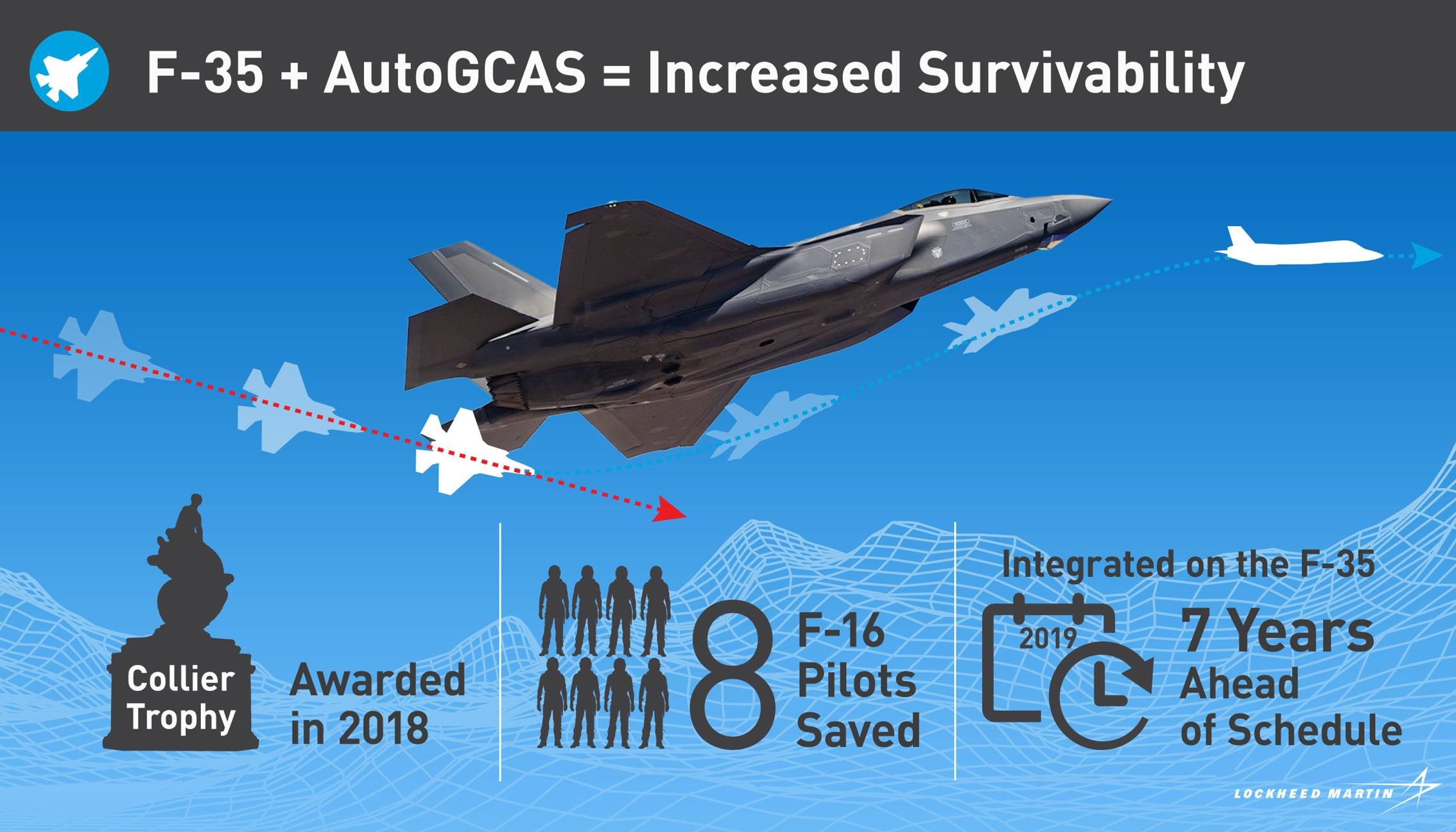 “The F-35 is the most survivable fighter jet in the world today – and the addition of Auto-GCAS will further enhance safety and save lives,” said Greg Ulmer, Lockheed Martin’s vice president and general manager of the F-35 program. “The safe and effective acceleration of this technology is a testament to the joint government and industry team partnering in an agile environment to deliver life-saving capability to our men and women in uniform, significantly sooner than planned.”

U.S. Air Force F-35As are the first to receive Auto-GCAS, and the system will next be integrated aboard the F-35B and F-35C variants.  The Auto-GCAS team was recently recognized with the National Aeronautic Associations’ 2018 Robert J. Collier Trophy, and received the prestigious award in June of 2019.

With stealth technology, advanced sensors, supersonic speed, weapons capacity and superior range, the F-35 is the most lethal, survivable and connected aircraft in the world. More than a fighter jet, the F-35’s ability to collect, analyze and share data, is a powerful force multiplier that enhances all airborne, surface and ground-based assets in the battlespace enabling men and women in uniform to execute their mission and return home safely.