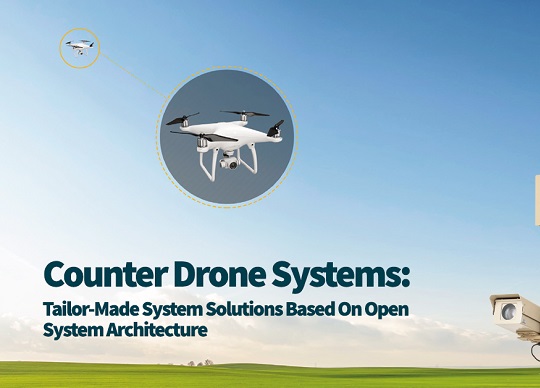 Mini-Micro Unmanned Aerial Vehicles (UAVs), commonly known as “Drones” are becoming widespread in many fields due to their autonomous capability, availability, and affordability. They are extensively used by security forces for reconnaissance, surveillance, and border security and in many other civil applications, especially in agriculture, construction, cinematography, and transportation. However, this proliferation and ease of use have also opened a gate for hostile usage of drones and turned them into weapons that are widely used as an asymmetrical warfare threat. The need for the protection of military and civilian critical facilities against this novel threat has been the main trigger of the development in Counter Drone System in recent years.

In a Counter Drone System, requirements, types and quantities of each subsystem may widely vary depending on the facility or the infrastructure to be protected, possible threat scenarios, the zone, and project budget. Hence, the solution set is not unique and the optimum solution must be achieved by customizing and adapting the system architecture as a tailor-made system solution for each application.

Detecting, locating, tracking, classifying, and identifying the small size and low-speed drones in a wide-area to protect is a complicated problem to be solved effectively and it becomes even more challenging when autonomous drones and swarm attacks are considered. Therefore, sensors of Counter Drone Systems depend on different modalities. The four sensor types that are commonly used in sensing drones are Radar, passive RF-DF (Direction Finding), Electro-Optical and Thermal (EO/IR) cameras, and Acoustic systems. A general comparison chart of key features between these technologies in terms of range, location accuracy, volume scanning, environmental conditions, tracking and classifying capability, autonomous, multi-target extension performances and cost are presented in Figure-2. 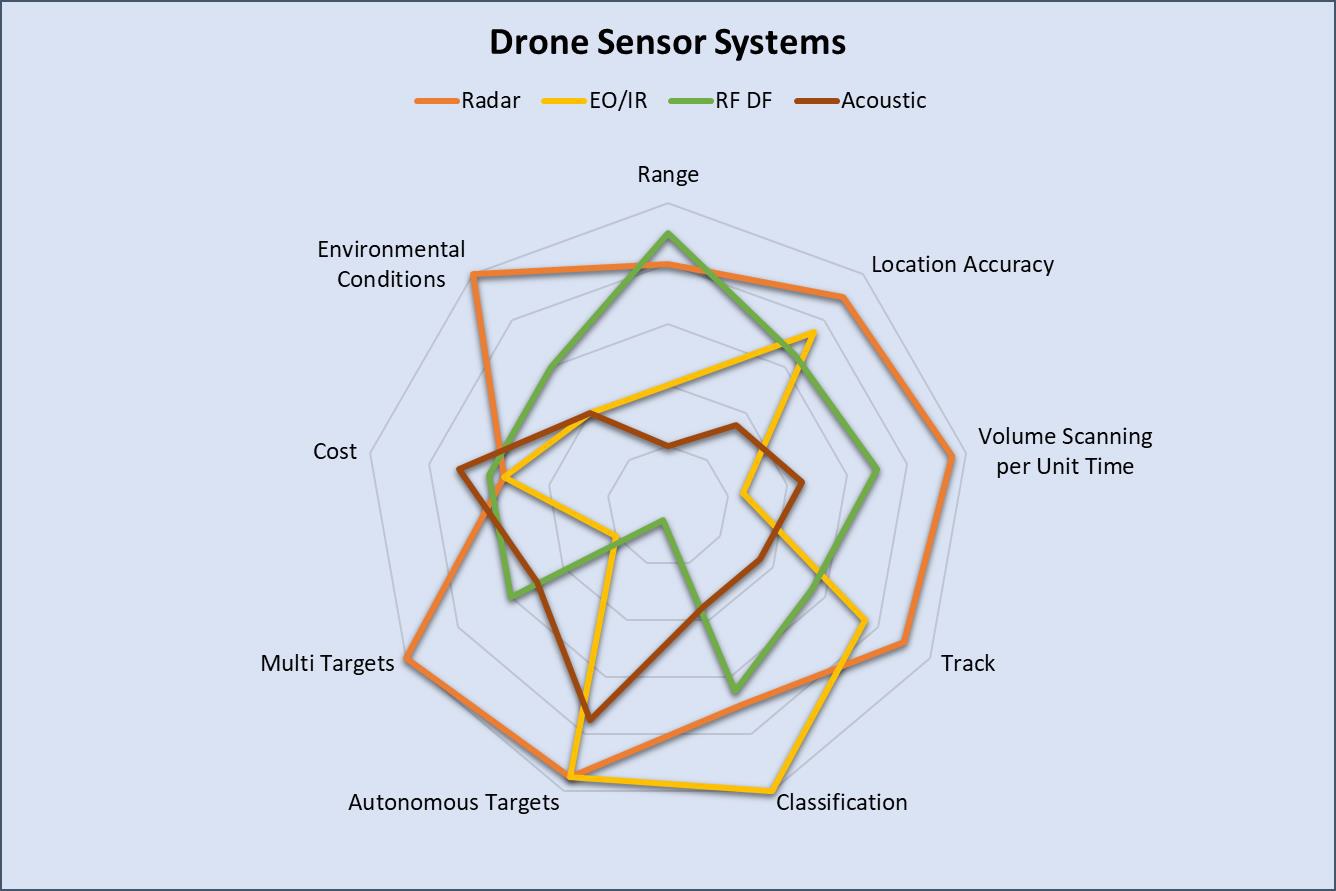 For detection and tracking, Radars are mostly used as the main sensor in Counter Drone Systems due to their precise localization, autonomous and multi-target detection performance besides sufficient range regardless of environmental conditions. These Anti-drone radars should be specially designed with effective radar signal processing algorithms to detect targets and extract intrinsic features from the processed signal for automatic detection and classification since low RCS, low-speed drones share key characteristics with birds. 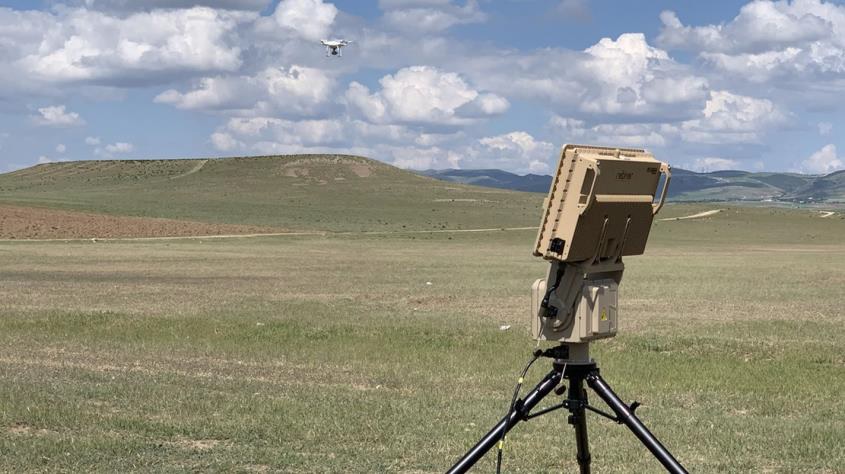 For a widen situational awareness zone passive RF-DF sensors with a high range of detection are used as early warning sensors. Some of those RF-DF sensors also support identification and classification by their preinstalled Drone communication frequencies library. But most precise classification is ensured by EO/IR systems. High-resolution cameras and thermal imaging techniques are used to capture UAVs in several backgrounds. These optical and thermal data received from EO/IR sensors are processed by customized AI-based algorithms to obtain the best performs for the protected territory. On the other hand, although acoustic signatures of drones also provide adequate data for classification, acoustic sensors are a less common option in Counter Drone Systems with their limited effective range.

Once the hostile drone was detected and identified it must be neutralized either hard-kill (kinetic) or soft-kill (non-kinetic) defeat system. Hard-kill solutions depend on physical damaging in short range due to the small, fast-moving and agile characteristics of drones. Besides, solutions like weapons create significant collateral damage and therefore they are not preferred in civil and heavily populated areas. Furthermore, kinetic solutions are one-to-one and need to be scaled linearly in swarm attacks which makes them non-cost-effective.

On the other hand, Soft-kill solutions jamming and spoofing are the most common methods used in Counter Drone Systems. Jammers defeat the drones by interfering with all radio communication channels and GNSS signals that drones rely on for control and navigation. Once drones lose the control and navigation signals they switch fail-safe modes (auto return-home or immediate landing modes) without achieving their mission. Main drawbacks of jammers are their ineffectiveness against autonomous drone attacks but those attacks usually do not succeed or have limited impact due to accumulated navigation errors without GNSS. The other soft-kill solution spoofing, take control of or misdirect the hostile drone by generating counterfeit control and GNSS signals. However, the spoofing is hard to implement for the drones built with protected communication link.

Like sensor systems, no Defeat System is fully effective for every scenario and the configuration of the Defeat System should be chosen according to the region to be protected, the risk and impacts of collateral damages and budget.

Command and Control is the mastermind and decision-maker of Counter Drone System that manages all activities in the kill-chain. It receives the data from various types of sensors and generates a unique air picture by sensor fusion algorithms. On Common Operational Display, it shows the threat information like position, classification and identification together with the detection and defeat zones on digital maps to achieve situational awareness. Then it applies the most appropriate countermeasure either automatically or manually depending on the chosen mode by using decision support algorithms like Threat Evaluation and Weapon Assignment. Depending on Sensor and Defeat Systems chosen, all AI-based decision support algorithms should be trained and optimized on real data collected from the installed area.

All in all, Counter Drone System requirements are not uniform and vary depending on the asset and the area to be protected. Therefore, Counter Drone Systems must have an open system architecture and each solution must be customized by configuring, adapting, training and optimizing the subsystems.

Meteksan Defence KAPAN Anti-Drone System (Figure-4) is a good example of open architecture Counter Drone System, which allows cost efficiency with modularity and scalability. It fulfills all the customer-specific requirements by integrating the necessary sensor and defeat systems and providing superior drone detection, tracking, and neutralization performance under the management of command control system for border and critical infrastructure security. 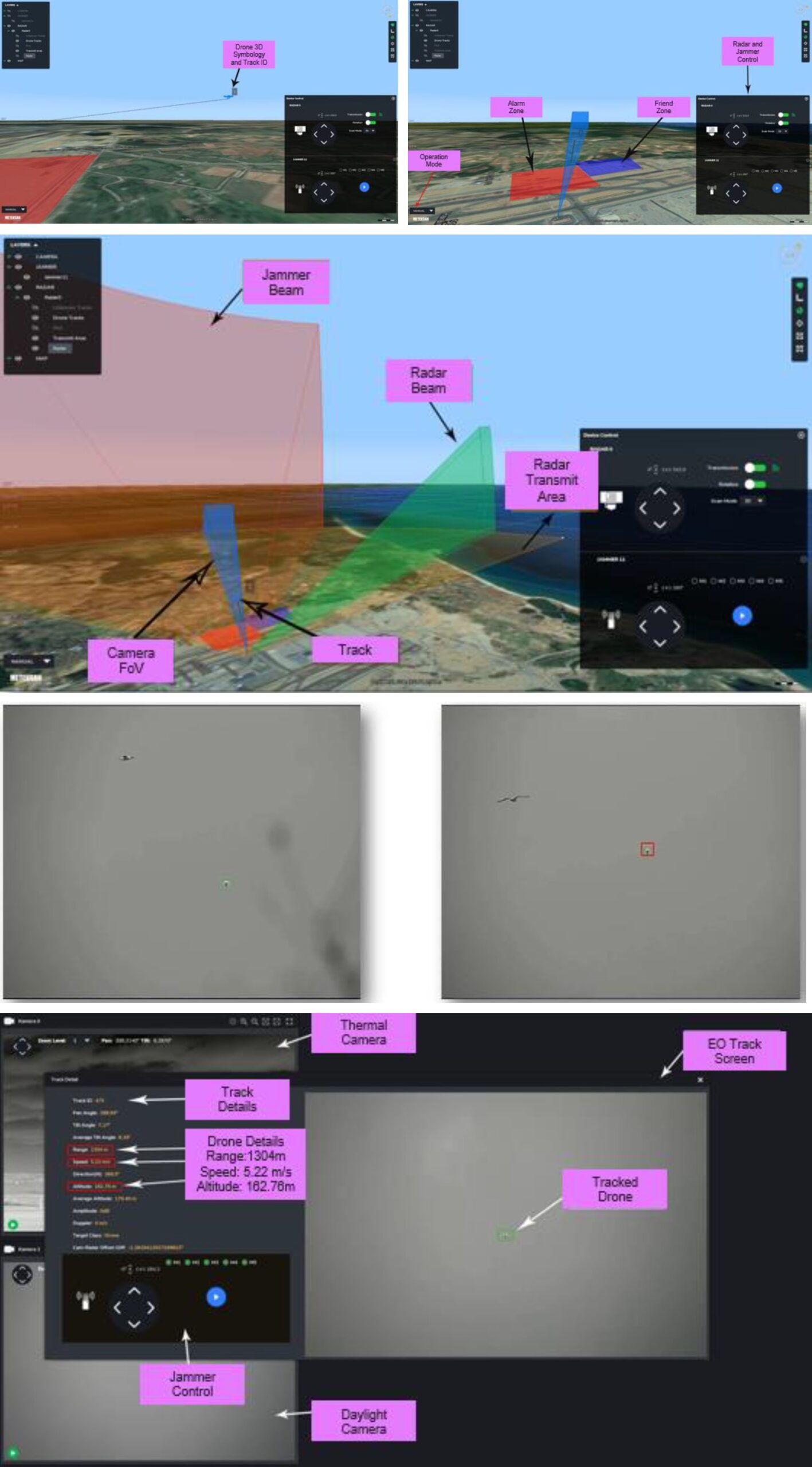 Published with approval from Meteksan – www.meteksan.com