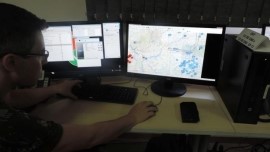 The Brazilian Army’s Land Operations Command (COTER) used the COMBATER constructive simulation system in an exercise for the Army Command and Headquarter Staff School’s (ECEME) first-year Command and General Staff Course (CCEM) during September 2018. This was the first time COMBATER has been used on the CCEM course.

COMBATER is a constructive simulation system powered by MASA SWORD. It has been adopted by the Brazilian Army and used by COTER for the training of commanders and headquarter staff of ground forces’ large military units. During this exercise, conducted by the highest education institution of the Brazilian Army, many COMBATER features were used to simulate and take advantage of the technical-professional capabilities of the first-year CCEM officers.

The Staff Course exercise objectives were to consolidate knowledge gained during the Ground Force Employment in Offensive and Defensive Operations class, at Brigade and Army Division level. This involved applying military doctrine and developing leadership skills in simulated military environments, with the use of COMBATER.

The exercise was conducted at the ECEME faculty, where first-year students from the CCEM / ECEME were organised in Command Posts and acted as High Command staff members, while the Direction of Exercise and the White Cell, involved controllers and operators of the COMBATER system, who were deployed to the East Training Center facilities.

The remote exercise was carried out under the same methodology used for the ground forces exercises, whereby the Command and Control systems are supported by the 2nd Area Telematics Center (2nd CTA); whilst in the East Training Center, facilities and technical support are provided by the Combat Simulation Division of COTER’s Preparation Command. 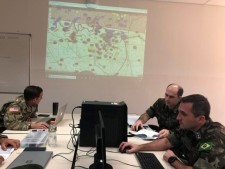 Marco Blasich, Manager of MASA do Brasil, said, “MASA has built a very positive relationship with the Brazilian Army over the years. Last year we were proud to announce that the Army had decided to renew its licenses and maintenance contract for the provision of SWORD for Command Staff training. We are delighted that COTER has now decided to extend training through the use of SWORD to a wider range of staff. We will work with COTER to ensure that technical support is provided and are pleased to see this ongoing relationship continue to flourish”.

About MASA
MASA Group (“MASA”) is a global company focused on the development of Artificial Intelligence-based Modeling & Simulation (M&S) software for the Defense, Homeland Security, Emergency Management, Serious Games and Games markets. A trusted developer of cutting-edge AI technology for over fifteen years, MASA has founded its success on products that combine scalability, adaptability and low cost of ownership, with a strong standards-driven approach to technology. The MASA product range, including MASA SWORD, MASA SYNERGY and Direct AI, is uniquely designed to simplify and optimize the implementation of Artificial Intelligence capabilities for automating and driving simulated behaviors. Such capabilities allow developers and end-users in various sectors to focus their efforts on enabling a series of cost-efficient and highly realistic applications – such as command staff training, crisis management preparedness, exercise preparation, after-action review, doctrine & equipment analysis, and corporate training. MASA products are already in use by leading organizations worldwide, including DGA, DSTA, DSTG, NATO CMDR COE the French, Brazilian, New Zealand, Swiss, Bangladesh, and Colombian Armies – amongst other major armies around the world – and system integrators or solution providers such as Ruag, NSC, CAE, Krauss-Maffei-Wegmann, Saab Training and Simulation, Thales, XVR, and SYSTEMATIC.